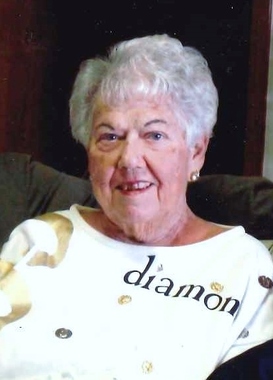 Back to Ann's story

1928-2019
Funeral Services for Ann Ferguson, 90, of Chickasha, will be held at 10:30 a.m. Friday, December 6, 2019 in the Ferguson Funeral Home Chapel with Kim Hayes officiating.
Anna Mae Laura (Copeland) Ferguson was born December 19, 1928, in Ryan, Oklahoma, the only child of Emmett E. Copeland and Vella M. (Samples) Copeland. She died on Wednesday, December 4, 2019 in Chickasha, Oklahoma.
Ann attended elementary school in Ringling, Oklahoma and had lived in Mountain View and Mangum, Oklahoma as a young girl. She moved to Salina, Kansas during her 9th grade year and graduated from Salina High School.
After high school graduation she came to Chickasha where she attended and later graduated from the Oklahoma College for Women, now the University of Science and Arts of Oklahoma, in Chickasha.
She married Donald Ray Ferguson, on April 15, 1948, in the First Christian Church in Chickasha.
Ann, in earlier years, had been a Substitute Teacher for the Chickasha Public Schools.
She was an avid OU fan and enjoyed following and watching the Sooners play football every chance she got. She loved flowers and gardening and working in her yard for hours. Ann loved cardinals and always had plenty of bird feed to fill her bird feeders.
She had been a member of the First Christian Church all the time her two boys were growing up, where she had been a Sunday School Teacher, for many years. Later she had been a member of the Parkview Christian Church.
Ann was preceded in death by both parents, and her husband Don Ferguson, in 1985.
Survivors include her two sons and daughters-in-law, Don and Vicki Ferguson and Charles and Holly Ferguson, both of Chickasha; six grandchildren and their spouses, Kim Ferguson and Michael Sanders of Chickasha, Chris Ferguson of Chickasha, Meagan Ferguson of Oklahoma City, Austin and Daniel Griffin of Blanchard, Erin and Richard McCauley of Piedmont and Jason and Morgan Ferguson of Blanchard; two step-grandchildren and their spouses, Natalie and Ray Crawley of Noble and Jeff Ferguson of Westminster, Colorado and several great-grandchildren.
Interment will be in the Rose Hill Cemetery under the direction of Ferguson Funeral Home.
Condolences to the family may be expressed at www.ferguson-funeralhome.com.
Published on December 5, 2019
To plant a tree in memory of Ann Ferguson, please visit Tribute Store.

Plant a tree in memory
of Ann

A place to share condolences and memories.
The guestbook expires on March 04, 2020.

Sharon Edwards
I'm so sad to hear of Ann's death. Ann was a wonderful friend, mother, mother-in-law and grandmother. She was vibrantly full of life and happiness with a special sense of fun and laughter. I'm grateful to have known her and experienced her joy of living. She will remain alive in all our hearts.
phyllis conrad
Sending thoughts and prayers. Ann was one of a kind. Loved your Mom, Charlie
Sharon Broadrick
I remember Ann from my childhood. I always thought she was so pretty. My parents, Myron & Betty Broadrick knew Don and Ann from way back. I used to love going down to the car business with my Dad. Ann was blessed with many more years than my folks, I pray for the entire family to find peace during this sad time.
Liz Tryon
Don and Family , so sorry for your loss. She was quite a woman and have such great memories of times spent with her. May prayers are with you and your entire family. Liz
Ron Acree
Condolences and prayers for the Ferguson family from the Acree family.
Danette Sikes
So sorry for your loss. Awesome lady.
View all