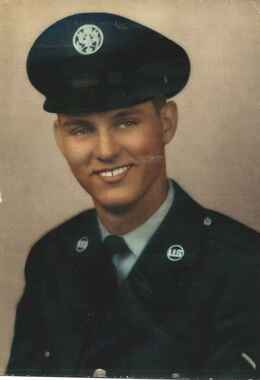 Back to Billy's story

1935-2020
Funeral services for Billy Dean Rhodes, 85, of Chickasha, will be held at 10:30 a.m. Friday, January 24, 2020 in the Ferguson Funeral Home Chapel.
Billy was born January 7, 1935 in Ava, Illinois to Paul L. and Mary Cross. He passed away Sunday, January 19, 2020 at his home in Chickasha, Oklahoma.
When Bill's biological parents divorced, his grandparents Bill and Tursey Cross took care of him until he was around three years old, then his grandfather's half-sister wanted to take him. The official adoption took place in 1945 and at that time he became Billy Dean Rhodes, the son of Luther R. Rhodes and Loise M. (Bargmass) Rhodes.
Bill attended school in Wolf Lake, Illinois and in 1953 he graduated from Shawnee High School there in Wolf Lake. He then started working at International Shoe Company until he entered the Air Force in January 1954. He served in the military for 20 years with the last two years spent at Andrews Air Force Base in Maryland with the same squadron assigned to Air Force One.
On July 31, 1954, he married Lillie G. Harris in Wichita Falls, Texas and they raised four children together and were together for 61 years until her passing in 2015.
After retiring from the Air Force in 1974, he worked for the Illinois Department of Corrections at the Menard Prison. They then moved to Oklahoma to be close to Lillie's family, where he started a career for the Oklahoma City Police Department in 1985 as a jailor and then worked in the property room, retiring in 1997. At that time, they moved to Chickasha and he worked at odd jobs.
Bill was a Mason Lodge Member and loved fishing, hunting, woodworking and playing golf.
He was preceded in death by his wife, Lillie G. Rhodes; parents Paul and Mary Cross and Luther and Loise Rhodes; grandparents Bill and Tursey Cross; brother Joe Bagley.
Survivors include three daughters Judy Leech of Monett, Missouri, Debra Medeiros and husband Paul of Austin, Texas and Rebecca Masson of Chickasha; son Anthony Rhodes of Houston; brother-in-law O.R. Harris of Georgia; eleven grandchildren and three great-grandchildren; and other extended family and friends.
Interment in Fairlawn Cemetery under the direction of Ferguson Funeral Home.
Condolences to the family may be expressed at www.ferguson-funeralhome.com.
Published on January 21, 2020
To plant a tree in memory of Billy Rhodes, please visit Tribute Store.

Plant a tree in memory
of Billy

A place to share condolences and memories.
The guestbook expires on April 20, 2020.