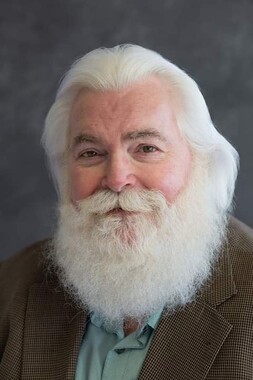 Back to Donald's story

Donald Ray Cox died February 12th, 2020; he was 55 years old.
Don was born in Fort Chaffe, Arkansas but was raised in Moore Oklahoma. He graduated from Moore High School in 1982 and that is where he developed his love of music being part of the band where he was also drum major. He was a talented musician who had a passion for Gospel music. He inherited his parents' love of Southern Gospel Quartet style and followed in his father's footsteps and was a bass singer in many throughout his young adult life.
In Don's early career he was a Deputy for Cleveland County Sheriff's Department and later a Police Officer for Newcastle and Bridge Creek communities. Don received the President's Medal of Honor from President Clinton for his work as a first responder after the Murrah Bombing. Don had a lifelong desire to serve his community which he did in many ways.
The most recent way Don served and made a tremendous impact was as "Santa Claus". Don learned of the need for ways to connect with children who are considered 'high risk', that is when he and his wife Tanya created, Poppa Claus. It was a unique ministry that Don used to share the love of Jesus to hurting families who were going through a crisis. He was a popular Angel Tree (children who have an incarcerated parent) Santa. He attended many Angel Tree parties in the state of Oklahoma giving children a special day and gift. He reminded them that they are deeply loved, and he knew they were going through a difficult time but he, the church and above all Jesus would be there for them.
He was appointed to be the official National Guard Santa. He was honored to serve the children of those serving in our military. This was an opportunity that touched Don's heart deeply because he was the proud son of an Army soldier who served during the Korean War.
He was co-founder and Pastor of Word Up! Ministries along with his wife Tanya. Don was able to connect with people all over the world with his sermons as his Facebook and YouTube channel still shows so many of his sermons today.
That is how Don connected with other Pastors across the nation that quickly became part of his brotherhood. Vincent Poole, his dear friend in Houston shared a story of when they went to Mexico for a mission trip. Don dressed in his typical overalls and fedora hat as he was walking through a village. He realized a young girl was following him and Don stopped to speak to her. She was excited as she was telling Don something. With a confused look on Don's face as he is waiting for the interpreter to stop laughing so he could tell Don what the little girl said. He translated, "She would like a pony for Christmas!"
Don is survived by his wife Tanya. Married for 14 wonderful years. Five children: Taryn Shorter and her husband Michael of Burns Flat OK their children John Shorter, Andrew Martinez, Gracie Shorter, and Hannah Shorter. Shaunna Cox and fiancé Timothy Herrick of Kaukana, WI and their children McKenzie Herrick, Collin Herrick, Kaelynn Hurrelbrink and Corbin Hurrelbrink. Daughter Nikki Cox of Lawton, OK and her sons Raylan Wright and Colby Cox, Don's oldest son, Nathan Cox and his wife Ashli of Newcastle OK and their sons Keegan and Karter Cox. His youngest son Sam Cox of Moore Oklahoma.
Don has a sister Vanessa Franklin and her husband Raymond Franklin of Tulsa. A dear friend he called brother after their 40-year friendship, Mike Williams and his wife Tammy from Fairbanks Alaska. One nephew, Danny Allspaugh II of Purcell and 3 nieces Ashley Garrison of OKC, Chelsey Adams of Ewa Beach Hawaii and Shelby Lanham of Skiatook.
He leaves behind many friends, family, and extended family.
He is preceded in death by his parents William Donald and Ima Jean Cox and his sister Iva Jean Allspaugh.
Private services will be held at a later date.
Published on March 13, 2020
To plant a tree in memory of Donald Cox, please visit Tribute Store.

Plant a tree in memory
of Donald

A place to share condolences and memories.
The guestbook expires on June 11, 2020.

Rainbow Wilson
Don was a wonderful person, inside and out. Every time I called him he had a joke to tell or sarcasm. Don loves giving my husband a hard time anytime we would in the taxi. When I got sick a couple years ago Don would call to check on me and offer to help in anyway. He was truly a wonderful person and friend and will be missed dearly.
gary and ladonna allen
Ladonna likes the way he told the bible story's, Gary like the way we where always wrong, Ladonna liked the way she could smoke during class. Gary liked the way he could always tell what was on don's heart at the time. great day when the portal was closed and don recovered, glory
View all