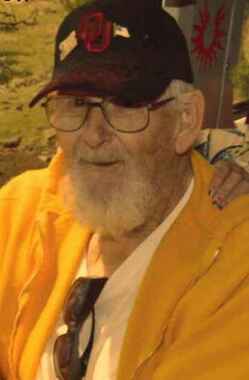 Back to James's story

1935-2020
Funeral services for James Russell Lincoln, Sr., 85, of Chickasha will be held at 10:30 a.m. on Monday, January 27, 2020 in the Ferguson Funeral Home Chapel.
James Russell Lincoln was born on January 6, 1935 in Oklahoma City to Jack Lincoln and Millie Bea (Wilson) Lincoln. He died Thursday, January 23, 2020 at his home in Chickasha, Oklahoma.
James grew up and attended schools in Oklahoma City. He met Patsy Sue Widdon at a roller-skating rink on Agnew Ave. They were married in 1956 and to this union their five children were born.
As a young man, James joined the United States Air Force and was stationed at Sherman Air Force Base. He was then transferred to Tinker Air Force Base. After his military service, he was a long-haul truck driver most of his life.
He liked to go to the dog track, attend auctions and do a bit of fishing.
He was preceded in death by both parents, his brother Johnny Lincoln and sister Jackie Doler.
Survivors include his daughters and sons-in-laws Lisa and Ed Brown of Chickasha, Pamela and Mark Takayama of Nevada, Terri Restrepo of Nevada and Kari Mathis of Florida; son James Lincoln, Jr.; brother Gail Lincoln; sisters and brother-in-law Peggy and Bill Burns and Bea Dozer; nine grandchildren and numerous great-grandchildren; and other extended family and friends.
Interment in the Westview Cemetery, Rush Springs, Oklahoma will be under the direction of Ferguson Funeral Home.
Condolences to the family may be expressed at www.ferguson-funeralhome.com.
Published on January 24, 2020
To plant a tree in memory of James Lincoln, Sr, please visit Tribute Store.

Plant a tree in memory
of James

A place to share condolences and memories.
The guestbook expires on April 23, 2020.