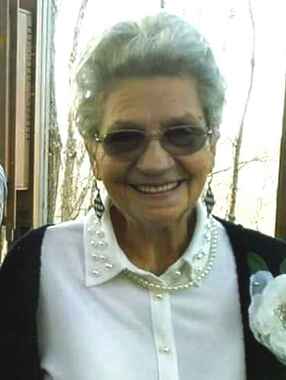 Back to Mary's story

1936-2019
Funeral services for Mary L. Landrum, 83, of Ninnekah, will be held at 1:00 p.m. Thursday, December 5, 2019 at the Ninnekah First Baptist Church with Pastor Richard Kerr officiating.
Mary L. (Sawyer) Landrum was born on June 16, 1936 in Pampa, Texas to Kenneth A. Sawyer and Bernice C. (Priest) Sawyer. She passed away Monday, December 2, 2019 in Norman, Oklahoma.
Mary grew up in Lefors, Texas and in 1951 she married Jimmie Dowd in Amarillo, Texas.
She attended Frank Phillips College in Borger, Texas majoring in Accounting. She then worked for Genesis House as an assistant administrator for ten years, working with troubled teenagers. And at the age of 71, she became a certified private caregiver and enjoyed this time of her life.
They came to Ninnekah in 1984 and Mary was a homemaker during that time. They were married for 40 years before Jimmie passed away in 1991.
She later married Tom Landrum in 1996 in Lefors, Texas and they made their home in Ninnekah and had 21 years together before his passing in 2017.
Mary was a member of the Ninnekah First Baptist Church for many years. She liked going places, crocheting and singing. She loved riding horses and she loved her family more than anything.
She was preceded in death by both parents, husbands Jimmie Dowd and Tom Landrum; grandson Jason Caples and brother, Roy Sawyer.
Survivors include her daughter and son-in-law, Evelyn and Billy Caples of Ninnekah; son and daughter-in-law, Jim and Kathy Dowd of Texas; step-daughter and son-in-law, Linda and Rick Lennon of California; sister-in-law, Eddie Mae Sawyer; grandchildren, Crystal Jernigan, Christina Kilgore and husband, Mitch, and Brenda Sacash; seven great-grandchildren and five great-great grandchildren; and other extended family and friends.
Interment in Ninnekah Cemetery will be under the direction of Ferguson Funeral Home.
Condolences to the family may be expressed at www.ferguson-funeralhome.com.
Published on December 4, 2019
To plant a tree in memory of Mary Landrum, please visit Tribute Store.

Plant a tree in memory
of Mary

A place to share condolences and memories.
The guestbook expires on March 03, 2020.