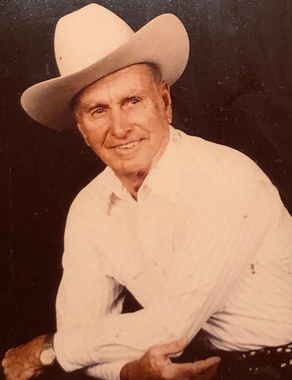 Back to Noble's story

Funeral service will be 1:30 p.m., Tuesday, January 28, 2020 at the Sevier Funeral Home in Chickasha. Interment will be in the Fairlawn Cemetery under the direction of Sevier Funeral Home.
Noble Prather, 105, of Chickasha, Oklahoma, passed away on Friday, January 24, 2020 in Chickasha, OK. He was born December 5, 1914 in Grand Saline, Texas to Eugene Franklin and Floy (Duncan) Prather.
Mr. Prather drove a covered wagon from Arkansas to Alex in 1923. He was a soldier in the U.S. Army and the U.S. Air Corp during World War II. He worked for Douglas Aircraft in California during the 1950's. In 1960 he moved to Cement and began farming in 1961. He was an avid golfer and a smooth two-stepper at the Senior Citizens Center.
He is preceded in death by his parents, wife: Dortha Prather in 1987, 4 sisters and 5 brothers.
Noble is survived by his children: Donnie Ray Prather, Joye Jones and husband Robert, Richard Prather and wife Pamela, 8 grandchildren: Wade Prather and wife Joy, Lisa Hain and husband Bill, Melissa Amos and husband Larry, Geno Malone and wife Carrie, Christina Jennings, Jennifer Jones, LaTosha Halsted and husband Matt, Riley Prather and wife Kassie, 17 great-grandchildren, 10 great-great grandchildren
Condolences may be made to the family at www.sevierfuneralhome.com.
Published on January 24, 2020
To plant a tree in memory of Noble Prather, please visit Tribute Store.

Plant a tree in memory
of Noble

A place to share condolences and memories.
The guestbook expires on April 23, 2020.

Sarah Stevens
Richard, I am so sorry to hear about your Dad. My thoughts and prayers are with you and your family during this time.
James Wagner
Our thoughts and prayers Go out to the family.
Nobel was a great man.
He will be dearly missed.
Jennifer Prather/Bowlin
I will miss my Uncle Noble everyday he was was a great man who loved all his family with all his heart R.I.P. fly high and watch over us all our sweet angel.
Stephanie Packer

Beautiful in Blue was purchased for the family of Noble Prather by Stephanie Packer.  Send flowers

Ruby boatwright
He will be missed
Danette Sikes
Very sorry for your loss, Richard. Holding your family up in prayer at this time.
View all