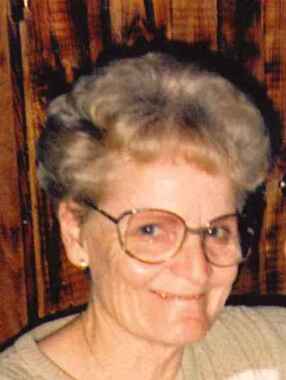 Back to Norma's story

1938-2020
Graveside services for Norma Jean Hebblethwaite will be held at 1:00 p.m., Wednesday, January 15, 2020 in the Fairlawn Cemetery in Chickasha.
Norma Jean Hebblethwaite was born January 12, 1938 in Chickasha, Oklahoma to Johnny and Thelma Hendrickson Johnson. She was called home on her birthday, January 12, 2020.
Norma Jean Hebblethwaite grew up in Chickasha and attended Chickasha Public Schools.
Norma married John "J.T." Hebblethwaite on June 9, 1956, in Chickasha and to this union her four children were born.
She spent most of her life as homemaker and rearing her children. She was an active member of the Nazarene Church, all the time she spent rearing her children. She loved going to garage sales and buying homes to flip with her husband J.T.. Her greatest love was spending time with her family and close friends.
She is preceded in death by her Parents; husband, J.T. in 2003; 1 brother, Bob Johnson; 2 sisters, Christine Shields and Mary Ellen Johnson; beloved son-in-law, Rick Tucker.
Survivors include daughter and son-in-law, Pamela and Stuart Callison, son and daughter-in-law, Garry and Georgianne Hebblethwaite, son and daughter-in-law, David and Teresa Hebblethwaite, daughter, Laurie Tucker; brother and sister-in-law, Charles and Deloris Johnson; sister, Leta Clouse; 3 grandchildren, Nicholas Burt, Nathan Keel (Stephanie), Shannon(Nick); great grandchildren, Natalie, Colten, Cameron and Hunter; great-great grandson, Coleman.
Condolences may be expressed to the family at www.ferguson-funeral.com
Published on January 13, 2020
To send flowers to the family of Norma Hebblethwaite, please visit Tribute Store.

Send flowers
in memory of Norma

A place to share condolences and memories.
The guestbook expires on April 12, 2020.

Lela Callison
Much love and many prayers for you all. Remember this good times.
Tammy & David Chastain

Tammy and David Chastain
You and your family are in our thoughts and prayers at this difficult time.
View all