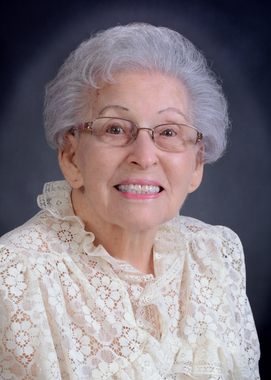 Back to Pauline's story

Funeral service for Pauline Anderson Spangler, age 98, will be held at 1:30pm, Saturday, February 9, 2019 at Epworth United Methodist Church. Rev. Scott Keneda will officiate.
Pauline Anderson Spangler was born to Oscar Lee Anderson and Agnes Amanda Barber on September 23, 1920 in Minco, OK and left this life on February 1, 2019 in Chickasha.
Pauline attended school in Minco through twelfth grade and then went to Chickasha to attend Oklahoma College for Women. In her second year she was offered the job of secretary to the Mayor of the City of Chickasha and she took it. She then became Deputy City Clerk and later City Clerk. While there, she married William Gordon Spangler who was already in the 45th Division and on active duty, stationed in Abilene, TX. Later she left the City Clerk's Office to go to work at Borden General Hospital in the Quartermaster and later became secretary to the Post Engineer. She remained there until Gordon came home in July, 1945 and they moved to El Reno where he worked on the Rock Island Railroad. He left that job to work for the 45th Division and went to Korea in 1950. They lived in Chickasha from then on. Pauline went to work at the Chickasha Hospital and Clinic as a medical transcriptionist and then became an accredited record technician. She went to Grady Memorial Hospital before it was opened, being responsible for getting the furniture in place, then when it opened she was in charge of medical records and became a Registered Record Administrator and was responsible for several hospitals around the area, namely Marlow, Anadarko, Carnegie, Paul's Valley and Duncan. She retired in 1982 to travel with her husband and they were avid square dancers and danced in Mexico, Europe, Canada, Alaska, The Caribbean Islands and South America. They lived on a ranch southeast of town where Gordon raised Longhorn cattle. She was inducted into the USAO Hall of Fame on November 3, 2018. Pauline remarked that it was quite a life after living through the depression.
Pauline was preceded in death by her parents Oscar and Agnes Anderson; brother Raymond Anderson; son-in-law John Snow; and granddaughter, Stacy Keller.
She is survived by her husband Gordon Spangler; daughter Gordona Snow; daughter Mandy Keller and husband Richard; grandchildren Gordon Travis Snow and wife Brandy, Sarah Hoffman and husband Jay; and great-grandchildren Carson Snow, Lexi Snow, Nora Snow and John Ronald Hoffman.
Interment will be in the Friendship Cemetery in Pocasset, OK. Arrangements are with McRay Funeral Home. Viewing will begin Thursday, February 7, 2019. In lieu of flowers, memorial donations may be made to the Pauline Spangler Scholarship Fund at USAO or to Epworth United Methodist Church Youth.
Published on February 7, 2019
To plant a tree in memory of Pauline Spangler, please visit Tribute Store.

Plant a tree in memory
of Pauline

A place to share condolences and memories.
The guestbook expires on May 08, 2019.

Restore the guestbook to view the 4 more posts by family and friends, and share a memory or message of condolence of your own.