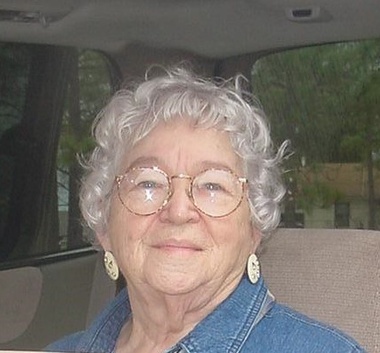 Back to Priscilla's story

Priscilla Dinwiddie Splawn was reunited with her family in heaven on December 6, 2019 after a beautiful and blessed 97 years on earth.
Born in Oklahoma on March 5, 1922 to John and Martha Dinwiddie, Priscilla was a resident of Chickasha, Oklahoma until 1987. She was a long-time employee of J.O. Wood Insurance and the University of Arts and Science of Oklahoma and was a member of the First Baptist Church of Chickasha. She and her husband were very active in the Independent Order of Odd Fellows Lodge and Daughters of Rebekahs, and other civic organizations. In 1987, she and her husband Odell moved to Jacksonville, NC to be near her daughter and family in the Southwest area. She was a resident of Carolina Rivers Nursing Center since 2003.
Priscilla was an accomplished seamstress. She loved life, romantic comedies, cooking, playing the piano, shopping (especially shoes), photography, sports (Oklahoma Sooners, Dallas Cowboys and the Atlanta Braves) and always enjoyed visiting with her family and friends.
She was preceded in death by her parents and sister Monetha Jean, Odell, her husband of 55 years, and children, Benita, Ola Jean, Ronnie and Jerry. She is survived by her son-in-law, Willie Justice of Jacksonville; grandchildren Barbara and Tony Rooks of Jacksonville, Charles and Sharon Justice of Greenville and Carolyn and Paul Hinson of Fayetteville. Great grandchildren Stacy and Caroline Rooks, Brent Justice, Becky Rooks, Nick Hinson, Andi and Jason Workman, Ivy Hinson and Dylan Justice. Great-great grandchildren Charlie and Will Rooks.
Her family would like to thank the staff of Carolina Rivers Nursing Center for their care, love and friendship shown to Priscilla during her time there. In lieu of flowers, donations can be made to the Carolina Rivers Resident Council (1839 Onslow Drive Ext, Jacksonville, NC 28540) to assist with resident recreational activities which Priscilla thoroughly enjoyed.
A graveside service was held at the Justice Family Cemetery, 1325 Gould Rd in Jacksonville, on Monday, December 9th at 2pm. Arrangements by Jones Funeral Home.
Published on December 10, 2019
To plant a tree in memory of Priscilla Splawn, please visit Tribute Store.

Plant a tree in memory
of Priscilla

A place to share condolences and memories.
The guestbook expires on March 09, 2020.

John P Smih
Thank you for your many years of friendship to our family. There isn’t a time that I drive down 9th st that I think of you. I love you. God’s Grace is Always Good.
View all