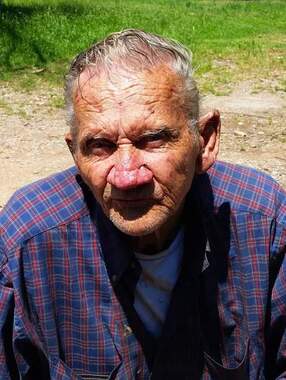 Back to Vaughn's story

1937-2019
Funeral services for Vaughn "Bob" Robert Jones, 82, of Chickasha, will be held at 10:30 a.m. on Monday, December 9, 2019 at Full Gospel Church with Eric Thornburg officiating.
Vaughn Robert Jones, known as Bob, was born on August 15, 1937 in Marlow, Oklahoma, the son of Vaughn Clyde Jones and Ilda Fern (Hancock) Jones. He passed away on Monday, December 2, 2019 at his home in Chickasha, Oklahoma.
Bob grew up attending school at Bray and Marlow. As a young man he worked alongside his family in the fields, cutting broomcorn and picking cotton.
In 1956, he married Elizabeth Virginia McNeese and to this union his four sons were born.
Bob was a very hard worker all of his life, he worked for the Southern Pacific Railroad in Arizona for a while, then came back to Oklahoma and worked for Rock Island Railroad for a time. He then owned his own truck and was a contract truckdriver, hauling hay and transporting for the oilfield. He also owned and operated C & W Tree Services.
In his earlier years he enjoyed shooting pool. For around the last 30 years he lived for the Lord and was a member of Full Gospel Church. He loved his church and his family.
Bob was preceded in death by both parents; his brothers and sisters, Johnny Jones, Sharon Frizell, Linda Laurens, David Jones and Geneva Bordwine; and his grandson, Little Ricky Jones, Jr.
Survivors include his sons and daughters-in-law, Robert and Joye Jones, Richard "Ricky" Jones, Randell "Randy" Jones and Mark and Mesha Jones; sisters, Alice Wendling and Donna Jones; brother, Daniel Jones; numerous grandchildren, great-grandchildren and great-great grandchildren; and other extended family and friends.
Interment in Fairlawn Cemetery will be under the direction of Ferguson Funeral Home.
Condolences to the family may be expressed at www.ferguson-funeralhome.com.
Published on December 6, 2019
To plant a tree in memory of Vaughn Jones, please visit Tribute Store.

Plant a tree in memory
of Vaughn

A place to share condolences and memories.
The guestbook expires on March 05, 2020.